Posted January 27, 2019 by James in Civil Rights Leader 548
Review as personality 8.1
Review our post 8.2
Summary rating from 9 user's marks. You can set own marks for this article - just click on stars above and press "Accept".
Accept
Summary 8.2 great 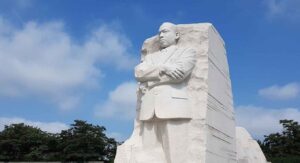 Best known for: Advancing the Civil Rights Movement and his “I Have a Dream” speech

I Have a Dream speech by Martin Luther King .Jr HD